Birth of the Power Trowel: Pumping Without Spraying – TLS #42

This article appeared in TLS issue #42.  This issue includes articles about experimentation and development of bales made from various types of materials.  Articles about methods and equipment for spraying bales with plasters appear in #43 Spraying Earthen Plasters in Colorado), #33 (Stucco Pumping Iron). 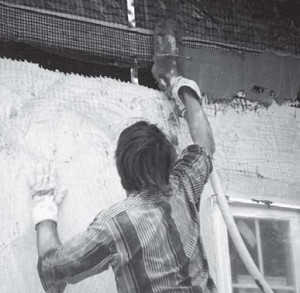 Mud arrives cleanly and directly through the homemade “power trowel” attached to a stucco pump.

Very early on in our careers as straw-bale builders, we realized that being able to pump plaster was going to be important if we were going to attempt multiple projects. Bodies and spirits just wouldn’t be able to keep up with endless hand-plastering. So, we bought an ancient pump and started spraying.

Oh, how I remember the days of the sprayer nozzle! The comforting “farting” sound, the reassuring overspray sticking everywhere, plaster in our eyes, noses, lungs, hair, shirts and sometimes ending up on the new roof of the house we were plastering (do not trip while spraying!). The nozzle end was a tiny opening 1/2 to 5/8inch(12-16mm), so if a tiny pebble made its way through the screening and into the nozzle, it could (and did sometimes, much to our chagrin) jam up and create back pressure, even to the point of exploding the hose. Luckily no one has ever been in the way of the hose at the time, but what a sorry mess it makes!

Devising a Solution. We talked often about improving the system. I had read about trowel ends for plaster pumps before, and this kind of fitting seemed like it would be cleaner and easier to use, but it seemed impossible to find one for a large stucco pump. As often happens in life, I set about to make my own. The first step was to buy some new supplies: 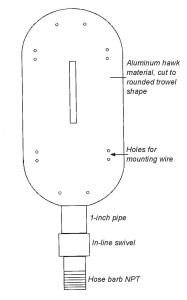 Then I followed these steps: 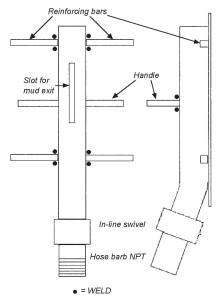 A New and Valuable Tool. Thus was the birth of the power trowel. It worked!  No more overspray!  We won’t kid you…we still make a mess when we plaster, but at least it’s more controlled now. The power trowel needs two operators (or one if that person is truly a power-power troweler, such as Andrew McKay!). One person handles the hose, the other holds the trowel end up against the wall. The trowel end emits a continuous “ooze” of plaster (hence the nickname “Barfing Snake”), and the speed is controlled by the throttle on the pump.

The trowel can be either moved sideways across the wall, or more popularly, up the wall. If you are using an up-and-down motion, the trowel must be held perpendicular to the ground, catching the material being squirted until you can begin applying at the wall’s base again.

There is quite a knack to this grueling job, and the pairs who are quite talented at it actually seem to dance together as they pass the power trowel back and forth, weaving gracefully around scaffolding, rocks, bales and other typical plastering obstacles.

We still sometimes reminisce about the old days of the “farting” spray, and will occasionally bring it out of the closet and take it for a test drive; once a friend wanted to record it for a CD, but do we really miss it? Not a chance! The power trowel has made life as plasterers easier, cleaner and quieter.

Peter Mack is a full-time bale builder and a partner in Camel’s Back Construction. He is co-author of the book Straw Bale Building (New Society Publishers). Contact: Peter Mack <strawbus@auracom.com> www.strawhomes.ca 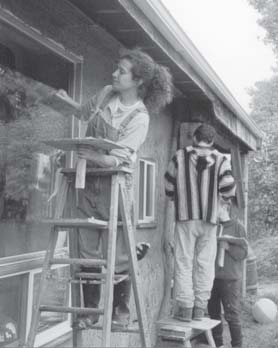 Figuring the Hidden Costs in Your Building Plans – TLS #41

Figuring the Hidden Costs in Your Building Plans – TLS #41