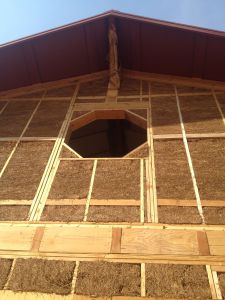 Yale Creek Brewery is a micro-brewery located in the Little Applegate Valley, the heart of southern Oregon’s wine country,. The brewery was founded in 2013 by Abbot Koehler, Jared Smith, Spencer Middleton, three early-twenties beer and self-sufficiency enthusiasts who met while attending Evergreen State College in Washington.

The brewers deep commitment to localization and sustainability is embodied in the significant amount of the ingredients in their beer they grow on site with plans to cultivate more on their 40 acre farm and education center. The 2,500 square foot brewery (formerly a horse barn) is powered by solar power and has been built with mostly local crafts people. In an effort to create a deeper sense of community ownership they opted to construct the walls of the tasting room area using 8” thick straw clay walls that would be installed during a week long work party.

Joseph Becker of ION Eco-building (from Olympia, Washington) and I, Lydia Doleman of Flying Hammer Productions, teamed up to co-facilitate the infill of the tasting room’s epic 7-day work party.

Joseph drove 9 hours with Rumpelstiltskin, the straw clay mixing machine, equipped with a 300 gallon slip/dunk tank to facilitate the mixing of an estimated 11 cubic yards of material.

Having much more experience with straw bale and my only straw clay experience was on much smaller projects in which all the material was mixed by hand, I was eager to see how much more efficient the use of Joseph’s giant straw clay tumbler would be.

We purchased 10 yards of pre-sifted clay/dirt from a local source and soaked it in ratios of 1:2 water to clay/dirt in 35-gallon garbage cans. We also opted to add borax and sodium silicate to ideally minimize the amount of water used to hydrate the clay to hopefully facilitate a quicker dry time. What the borax and sodium silicate (added in 1 cup borax per and 2 oz. sodium silicate per 20 gallons slip) did was precipitate out all the silt from our mix, resulting in a higher clay content in our slip. But consequently we had a lot of silt and gravel to remove from the bottom of the buckets. 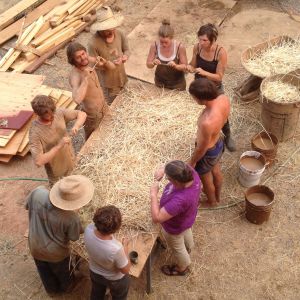 Once our 6 containers of slip were prepared we used a diaphragm pump to send the slip up into the elevated 300-gallon tank that would gravity feed into the tumbler.

We ordered 30 two-string rice straw bales for the project, assuming we would use some for scaffolding and have plenty left over for mulch. Rice straw is oddly more available in southern Oregon than wheat or barley! We did incorporate some barley straw from the brewery’s barley harvest during the work party.

The rice straw was baled in such a way that it was a bit of a process to unfurl all the flakes into a massive pile of loose straw that could be fed into the ever hungry Rumplestiltskin. Joseph Becker, gem of a human being, with the help of his sweet son Noah, led the loading of the tumbler and the mixing of slip, while I worked on the interior guiding people in the delicate balance of tamping straw clay enough to get it to adhere to itself but not so much that the insulation value was compromised from over tamping.

The walls were split stud 2×4’s with a minor amount of wiring and plumbing to work around. We opted for curved window openings, which were achieved by using Sonotube concrete forms cut into quarters length wise for a controlled radius around the openings. Electrical boxes were placed flush with the studs to keep the form work flow stream lined. We used 5/8” cdx plywood with strong backs placed at the top of the 24” high forms and deck screws to avoid screw breakage and stripping. At the tops of the stud cavities and where a 2×8 marked the end of a framing section we nailed on ‘keys’ to help hold the straw clay in the event there was any shrinkage after drying. 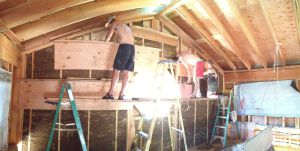 Straw clay at the top

The first days of the work party we started in the loft and used a pulley system to hoist our materials up. Each day averaged about 10-15 volunteers and we completed the straw clay in 7 long but fun filled days. The work party culminated in a large BBQ and Brew work party on the last Saturday. The carrot on the stick was the impending keg that would be tapped on site once we reached a particular point. Incentive!

In a ceremony to celebrate the connection of place the brewery is intending to foster, the brewers, builders and volunteers mixed a batch of straw from barley grown on the farm with the slip infused with some of Yale Creek Brewery’s Yale Creek Pale Ale (aka YPA), toasted the beauty of the people, the planet and place, and how tasty the brew was! Here’s to straw clay-ale!

Lessons learned and critiques
With a strong straw bale construction background I found myself at times thinking ‘we would be done by now if we had opted for straw bale!’ However, we wouldn’t have had a quiet worksite (how many hours of chainsaw notching would have been involved!?), and I am drooling over getting to plaster perfectly flat walls of straw and clay. I have to say, straw clay trumps straw bale in-terms of inclusivity as we had lots of little ones on our mostly quiet and dangerous-power-tool-free site. However, with a crew of 5 we could have stacked, trimmed and applied a scratch coat of plaster on the same space. It’s a testament to how no natural wall system is perfect!

I do think if I were to do it again, I might have skipped on the borax and sodium silicate. As the walls dry I am noticing ‘blooms’ from the borax and have had issues in the past with borax blooms bleeding thru the to the next layers. If I had thought to do it, I would have done a wall section without the additives to compare the dry times and see if there was indeed a difference. In addition to that, It might have been more efficient in time and money to have used bagged clay as the 10 yards of sifted clay ($1200!). We could have mixed it all in the 300-gallon trough and by passed the pump rental, and the silt relocation and sifting, but then we would be taking larger and larger steps away from localized and more meaningful materials. 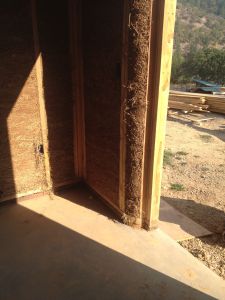 If I had a time machine I would have used 55-gallon drums in lieu of the garbage cans and I would have been more diligent about installing the keys. Now that the walls have dried there are minor gaps where the straw clay has pulled away from the un-keyed areas and we have one spot where we have a bulge that will have to be mended with plumbers tape. I would have also like to have inspected the framing prior to the installation of the plumbing and electrical and removed a lot of unnecessary 2×4’s on the interior portion of the walls.

One challenge the rice straw presented was that without seed heads that germinate at lower temperatures there was no obvious way to determine when the wall was dry. I attempted to use my Delhorst Straw/Hay moisture meter, but it was obviously not calibrated for straw that was so intensely mineralized. Probing it into seemingly bone dry powdered clay on a hot, dry windy Southern Oregon August day was giving me readings of above 30%. So we gave our 8” thick walls 5 weeks of dry time with full southern exposure and two monster fans going 24/7. Next wall with rice straw I will buy a bag of wheat seed and sprinkle it in the mix as we go.

The walls are now dry and amazingly solid. As we are prepping for plaster it is interesting to note how many gaps there are in the framing where the wood has shrunk away from itself (in the case of sistered vertical members) and how there are very few gaps in the straw clay; another virtue of the continuous insulation.

I would not have changed the forms and totally recommend spending the extra money on good deck-screws. We had ZERO screw breakage, which paid for itself in spades!

Over all it was a wonderful experience only to get more wonderful as the Brewers and the builders are dedicated to making a beautiful space to match the rather heavenly place they live.

Lydia Doleman is a natural builder and activist currently practicing in Southern OR. She has been building since she first stole her sister’s legos at the age of three. For the last thirteen years her work has been a culminating point for ecology, art and social justice.

Flying Hammer Productions is her natural building construction company focused on pushing the bounds of affordable and energy efficient housing, training people and communities in various building skills and infusing the dreary urban fabric with structures that reflect beauty, sustainability and community. You can usually find her in the
mud, wrestling straw bales, laughing or just flying around by the seat of her pants….www.theflyinghammer.com  (503) 975-4232 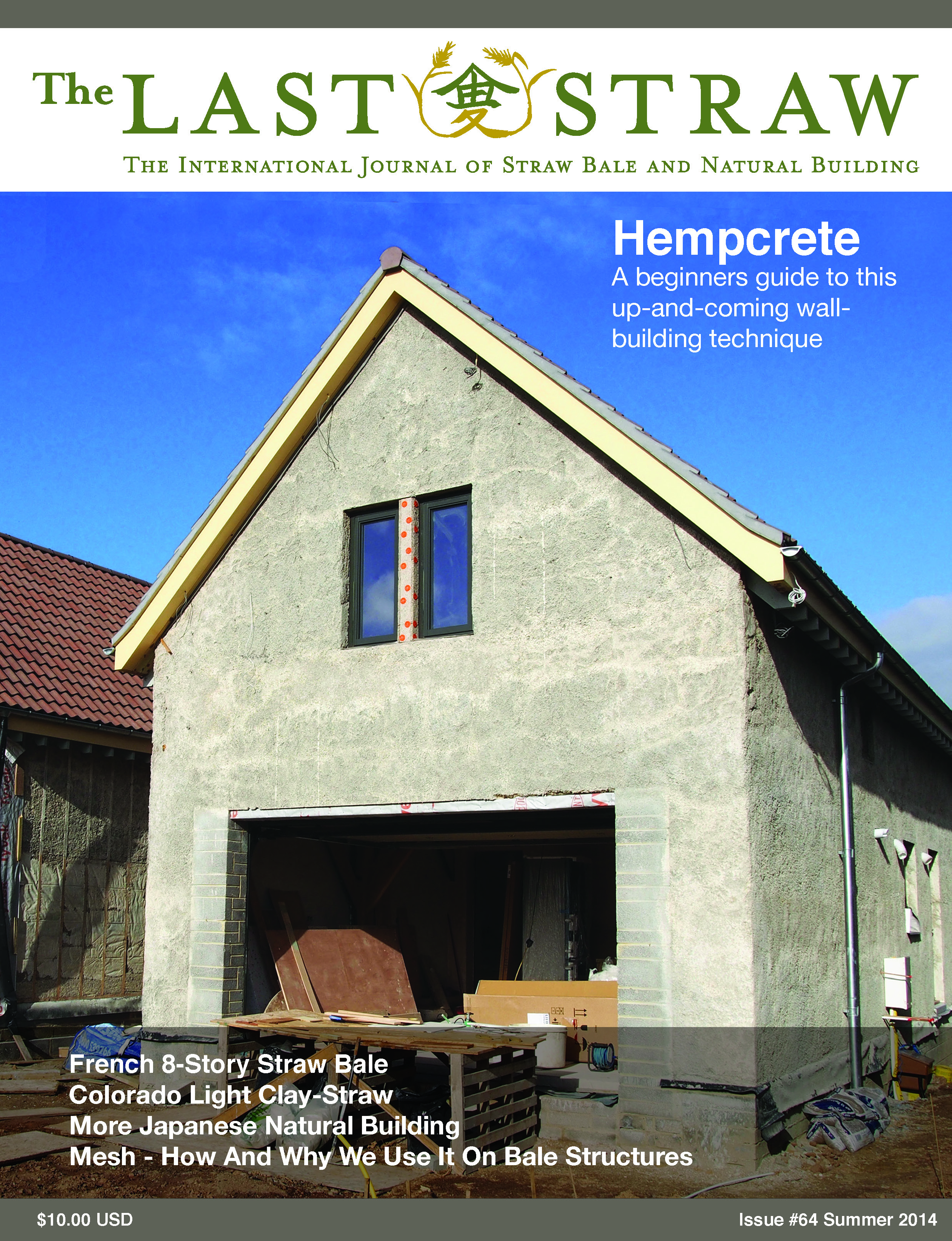