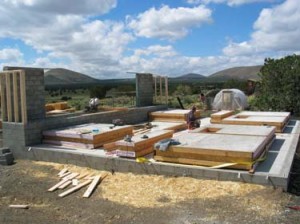 Northen Arizona provides an ideal climate in which to build with straw bales and has been the site of many such structures since the 1990s. Ed Dunn has been the principal designer and builder of straw-bale homes here for over a decade. In May‘04, Western Strawbale Builders (WSB) was formed by Jason Radosevich and Matt Robinson, former crew members of Ed Dunn. The focus of WSB is to increase the scope of straw-bale building to include affordable housing as well as top-of-the-line custom housing.

With affordability in mind, systems using prefab panels seem to us the most promising avenue of approach to building with straw bales. In order to spare you the well covered details of this method of building, you can reference several articles published by TLS including: Chris Magwood in TLS#42, Canada Guy TLS#47, and Brett KenCairn in TLS#48.

Western Strawbale Builders was able to show off our skills in a project this past Fall here in Northern AZ. Designed and overseen by Ed Dunn, this project was an additional building done for The Star School, an off-grid solar-powered charter school on the borders of the Navajo Reservation in Coconino County. Star School teaches middle school students subjects, including permaculture, cultural awareness, and sustainability. Proprietors Mark and Kate Sorrenson therefore wanted to build a structure that reflected these values while fitting into their budget.

Ed Dunn designed this structure to utilize passive solar principles, trombe walls and a greywater planter. It is to be used as a combination classroom, performance hall, and wrestling gym, as well as any other creative uses Mark and Kate come up with.

We decided to hold the bid on this project to the regular bid price for stick-framed structures in our area to see how well we could compete. To our mild shock and great relief, we were able to build to these numbers and still afford our business a modest profit. With a four-man crew including ourselves and the exceptional abilities of carpenters Alden Catherman and Phil Mason, the class room was completed in eight workweeks, beginning to end.

We feel that this project, although relatively simple in scale and design, can serve as an example of an affordable option for people who love the idea and feel of straw-built houses. Hopefully this structure and others like it will help in bringing straw-bale houses into the mainstream.