Straw Bale and Building Science: Growing Up Together 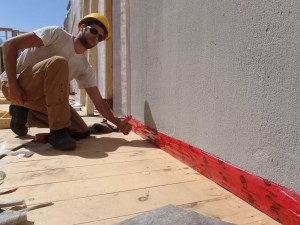 The straw bale revival of the 1990s reintroduced builders to a pioneer building method that showed remarkable potential for building in a modern context. The nature of the basic components of a straw bale wall system – bales with plaster applied directly to bales – combined several obvious advantages over other wall systems while simultaneously raising some serious questions.

The advantages are familiar to TLS readers: low environmental impact, simplicity and well placed thermal mass. The serious questions and attempts to answer them were the lifeblood of TLS: What about moisture? Air tightness? Cold climates? Humid climates? Longevity of the straw in all these conditions?

There was a lot more going on in the construction world of the 1990s than the straw bale revival. The housing industry was recovering from multiple moisture-related disasters, many caused by overly airtight but under-ventilated homes and/or the use of un-vented “waterproof” exterior cladding systems. The research into these issues, among other factors, led to a rise in prominence of “building science” as a distinct engineering discipline. The straw bale revivalists were extremely lucky to have the attention of some of building science’s leading practitioners, in particular John Straube, who authored several key articles and studies about straw bale walls that were essential to answering the question of why bale walls were so resilient, despite some seemingly obvious moisture concerns.

Simply put, building science attempts to quantify the movement of heat and moisture through building assemblies and help designers and builders to make decisions that lead to structures that adequately deal with the moisture and temperature regimens of their particular climate and use.