This article originally appeared in TLS #55 and was the feature article in that issue. 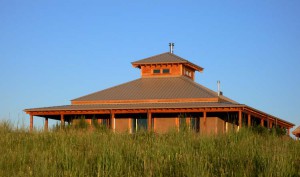 Our interest in straw-bale construction grew out of our concern for energy efficiency. Our research into building energy efficiency grew into an awareness of sustainable building practices. An urge to build an energy-efficient home of materials that are sustainable grew as we explored these issues.

As we examined the site conditions for our home in Idaho, we found prevalent winds came from the southwest, passive solar orientation was due south, and views were predominantly southeast toward the Teton mountain range. The homestead to the west anchored the place visually and the rolling grass and grain fields to the north and east held their own hypnotic beauty.

We asked ourselves, “How do we place a building here and what would it look and feel like?” 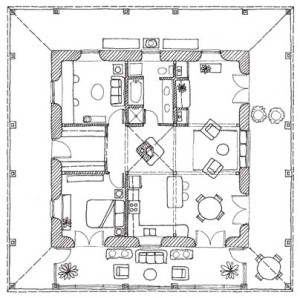 We walked the site many times over several years, searching for the right place to build and the right kind of structure to build to respond to the soil, views, and
weather. When the irrefutable drive to build overwhelmed us, we went to the land and stayed for three days, walking, feeling, talking, and looking for the right place. We examined alternative ways of achieving solar gain while maintaining prominent views and avoiding challenging weather patterns.

The summer sun in our high mountain desert can be intense. The days can be hot, evenings cool down fast when the sun goes down, and the nights are cold. So a porch wrapped around straw-bale walls made sense to us. It can protect us from the sun, provide outdoor living space, and allow the straw bales and the internal thermal mass to moderate and maintain a relatively even temperature inside the house. The porch would also serve to protect the earthen-plastered bales from the weather.

We wanted the house to sit lightly on the land and allow the rolling surface of the earth to flow unimpeded past the house. We raised the porch surface only six inches above the adjacent ground around the entire perimeter to require only one step to grade.

We have visited and experienced several houses that deeply impressed us and we developed several drawings to reflect this approach. They were approximately square, had hip roofs and wrap-around porches. The deep porches were occupied with plants, chairs, tables, firewood, clotheslines, and other apparatus for living out-of-doors under cover.

After consideration of many schemes, we settled on one that is 34-ft. square, providing 1,156 gross sf and 961 net usable sf. Seventeen percent of the total area is in straw bales and the house is 83 percent efficient. It has a kitchen/living area, one bath, a master bedroom and guest room. There is a loft for the grandchildren. 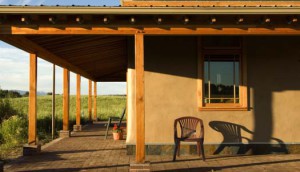 Colleen had researched the area for organic straw bales that were 14-in. high x 18-in. wide. We found a farmer in Blackfoot, about 90 miles away, who had grown straw without herbicides or pesticides. Because the crop had matured and there was rain forecast, he cut and baled the straw. We had been working to have the house dried-in before taking delivery of the bales. We were able to place the bales under the newly finished roof before rains. Bale installation took only one week, notching and fitting under the roof and between columns and windows and doors.

Several friends called out of the blue and said that they heard that plastering was about to happen and could they come to help. Yes! Stan, John, Joe, Susan and I spent the weekend hand applying the beautiful chocolate colored earthen plaster mixed with long fibers of straw. We were at the end of summer and we wanted the plaster to dry before it could freeze, rendering earthen plasters no good. We were able to apply a rough coat on three walls over a three-day weekend. Brian and I finished the final wall in two days. The first weather coat had taken about one week. The building season ended and we left for the winter, planning to return the next spring. 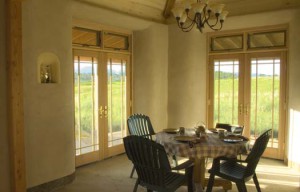 When we returned in June 2003, we turned our attention to the final plastering on the main house. Sift clay, chop straw, mix clay to water, add straw and sand and apply to the rough coat completed last year. Check proportions, read the newly published book Natural Plasters, do tests and define how we want to do the work. Out of the research and study and questioning came a process we are very pleased with. We applied an infill coat of stiff plaster to the existing hand-applied rough coat using wood floats. We then brought the surface to within 1/4-in. of the /finish surface using a plaster that has more sand and less straw, sent through the chopper a second
time.

The final coat was applied with a steel trowel with curved corners, and polished with stainless steel Japanese trowels. It turned out quite nicely, with soft rounded corners and the bottom edge flared out to meet the metal drip edge.

We had read of clay “alis” paint. We read recipes in the two books and called the Steens asking for their advice. “Start with one part wheat paste glue, add two parts water, add clay until it covers your finger without showing a print.” We added one small scoop of burnt umber and about four cups of medium-sized mica flakes. We painted it on with 4-in. brushes, allowed it to become almost dry, and then polished with a damp (not wet) sponge.

Wow! What a difference it made. When plastering, the joints between one day’s work and another were visible, even though we tried diligently to feather it out. The alis unified the whole surface, and no joints were visible. It has a soft sheen from the mica, and it invites touch, as everyone who comes to the house exemplifies. Some have said it looks like leather. We think it looks like the earth around the house, but is refined by plastering and polishing. It looks like it belongs to its surroundings.

Building our house started out as a dream, a desire to do something sustainable, to build with one’s hands. Our project then became something physical, real, as we worked with the foundations, concrete, rebar, straw bales, earthen plaster, roofs, wiring, and all the rest.

In the summer of 2004, we installed a photovoltaic system to serve electrical needs of the house. We mounted the solar collectors on the garage porch. Batteries and inverter are in the garage with underground feeds to the house.

Well drilling estimates came in at $20,000, so we looked for another alternative. We built an 18,000-gallon underground cistern for a fraction of the cost that takes rainwater from the house and garage that passes through a filter before going to the tank. Before use in the house, it also goes through a charcoal and UV filter. It filled completely the first winter. With the exception of propane for heating and cooking, we are entirely off-the-grid. What a feeling of freedom!

Our home developed meaning for us beyond our wildest expectations. There has been a profound change in direction of our lives and satisfaction since we explored ways of becoming involved in sustainable building and focused on strawbale as a preferred method. Thirty-five years of life energy are focused on building our home. Feeling through our needs, responding to the site, and building the house day-by-day have been the most satisfying and meaningful experiences of our lives.

Wayne J. Bingham and Colleen F. Smith, a husband and wife team, have been involved since 1998 in straw-bale design and building. Their interest is an outgrowth of an exploration of energy efficiency and sustainable building techniques. In the mid-1990s, they attended several American Institute of Architect Green Building conferences where they began to understand the need for finding new ways to build without endangering the earth and its resources or future generations.  Seeking a direction of their own, they went on a natural building odyssey to the Southwest U.S. evaluating cob, adobe, rammed earth, earthship and straw-bale buildings, visiting or staying in each. They evaluated thermal performance, beauty, the feel, construction techniques and concluded that straw-bale building held the greatest possibility to satisfy their interest.

They attended The Canelo Project straw-bale and earthen plaster workshops and came away with a love affair with strawbale and earthen plaster that has not abated. Wayne immediately plastered their concrete block garden wall in their backyard with earthen plaster (see p 11 of this issue). They returned to the Steens in 1999 to spend a year involved with workshops, construction and collaboration with Bill and Athena on the development and production of Small Strawbale published in 2005 by Gibbs Smith Publishers.

Avid photographers and travelers, Wayne and Colleen have searched out and documented indigenous buildings in the United States, Greece, Great Britain and Italy and have developed a large library of images that were the start of the book. They took additional trips to explore and further record specific straw-bale buildings that now constitute a new book called Strawbale Plans.

In addition to Wayne’s working with owners and builders on straw-bale home designs and conducting workshops, Colleen and Wayne have put their experience into building this straw-bale home of their own in Teton Valley, Idaho. www.wjbingham.com 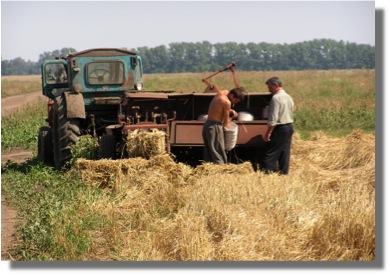