Editors Note: We plan to have a comprehensive article covering as many of the tilt-up straw panel systems on the global market as we can in Issue #64 due out in July.  Please also note that the images associated with the thumbnails on this page are of large size.  We wanted to keep them original size to allow you to see details clearly.

INTRODUCTION
Recent times have brought an increasing wave of environmental and energy efficiency awareness in the building industry throughout Australia.  This increased awareness of the effect of logging on our forests, lakes, and streams, as well as heightened concern for the energy cost and efficiency of our buildings and ever-increasing costs of construction materials is bringing tremendous pressure for change to the Australian building industry.

A primary focus of this change is the development of alternative forms of construction for single and multi-family housing as well as commercial and industrial buildings.  With a tradition that dates back almost 200 years, the Australian building industry has utilized timber extensively for use in wood frame construction, concentration on wood framing timber as the principal raw material for the structural shell of the majority of our housing and much of our light commercial structures has tremendously diminished our hard wood and softwood forest resources in Australia.

The cost of framing timber has more than doubled in the past five years. The price of timber is projected to continue to rise over the course of the next decade with additional concerns over the quality and availability of that timber.  The price and in some areas the availability of energy has added a new and important factor in most building projects.  With these facts in mind, the building industry, known for its rigidity and resistance to change, will have to look at replacement materials for framing timber in home and commercial construction.

THE SITUPS*
We are in the process of developing and bringing to the market place a unique, and ecologically sound, structural insulated panel building system.  These panels will be able to be put into place by two people.  This structural panel system provides a cost-effective, building system that is based on an environmentally responsible manufacturing process.

Huff ‘n’ Puff Constructions are manufacturing a structural super insulated panel that uses as its core material waste agricultural cereal straw from wheat and other cereals commonly grown in Australia. 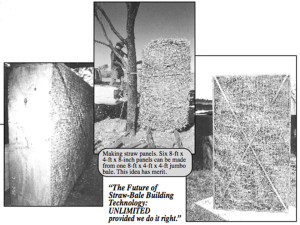 With the recent high rise in energy costs and energy availability this product’s value to the builder and his client is a product that is more important now than ever before.  THE SITUPS* is highly competitive to conventional building methods.  With the reduced construction time, energy savings, non-toxic nature of the product, and strength and durability of the product indicate we have a building system whose time has come.

HISTORY
It was on the banks of the Murrumbidgee River at Hay that we made our first SITUP.  This event was first published in The Last Straw many moons ago now.  It involved a BIG chain saw and a jumbo straw bale 2.4 m x 1.2 m x 1.2 m (8’x4’x4’).  We made three panels out of the one bale and had a lot of waste with the “method” we used at that time.  Back to the drawing board…  [Huff ‘n’ Puff shared this technique in TLS #24, Winter of 1998] 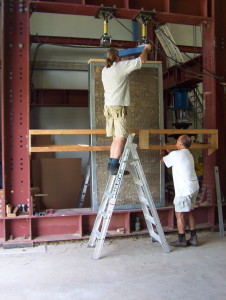 In between building straw bale houses and wineries we kept on refining the process over the past 8 years.  Eventually we got an order to make 60 x 2.4 x 1.2 x 150 mm panels for a straw bale house that we were building in Kangaroo Valley, near Sydney.  These panels were to be used for the internal walls and are non-load bearing.

We had these internal panels tested at the University of Western Sydney.  Our tests were to establish their load bearing and wind loading capacity.  They did not pass muster for load bearing but showed us their potential.  However the size of 150 mm wide proved to be very hard to manufacture and will need a lot of refining in the 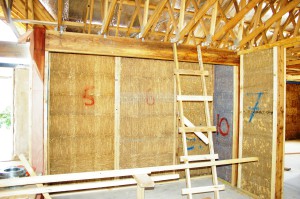 process to make them a worthwhile proposition.

FIRST LOAD BEARING PROTOYPES
After many experiments and research we have chosen a method that we feel has the potential to change the way we build with straw bales now and into the future.  We also realise that several straw panel systems are now on the market in parts of Europe and Canada.  Our opinion is that more is good and will only lead to the acceptance of building a house, flats and even high rise units and many other types of building by adopting straw as the medium in tilt-up wall technology. 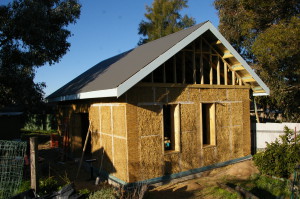 We have now completed two SITUP buildings in New South Wales.  One close to home in a suburb of Wagga Wagga, and the other on a farm near Yass, which is close to Canberra.  We are now filling an order for a three-pavilion SITUPS home in the Hunter Valley of New South Wales. 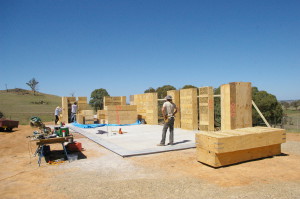 The SITUPS are currently 2.450 to 3.000 metres high and come in various widths from 600 mm to 1.2 metres.  We can also make them between 350 mm and 450 mm wide.  The cladding can be a variety of material from renders to weatherboard, corrugated iron and many other forms of external sheeting.  Internally they can also be clad in render or Gyprock and various types of lining boards.

We are also developing a portable SITUPS factory to make these on a building site.

SUMMARY
The SITUPS will greatly reduce carbon emissions from new buildings through savings during manufacture and the operation of the building.  We already know this, having built many straw bale buildings since 1998 and together with 145 straw bale building workshops now completed. 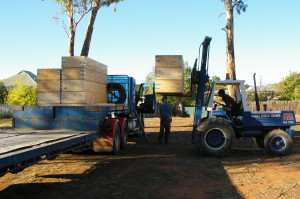 Our goal is twofold; first, to reduce the carbon impact of modern buildings with the SITUPS and; second, to be able to utilize a waste product of our wheat and rice cereal growing in Australia where rice straw alone is burnt at an alarming rate.  Some one million tonnes goes up in smoke (particulates and carbon) every year.  Enough straw to build, say, 44,000 three-bedroom SITUPS homes on an annual basis and that is only from the rice grown in one area of Australia.

All the other benefits that come with straw bale homes that we have know of and practiced over the past 17 years apply equally to the SITUPS.  The main difference to conventional building with straw bales is that the SITUPS are uniform pre-compressed at time of manufacture and hence are very fast to build with, saving time and money.

* The SITUPS is a registered trademark of Huff ‘n’ Puff Constructions